SPIRITED HALLOWEEN INTERVIEW WITH THE CAST OF "LOST SOUL"

Halloween is upon us. It is a night for spooks and frights. Some believe the veil between this one and the next is the thinnest on this eve. Do you believe in ghosts? About 45% of Americans do. How many members of Geek Unleashed fall under that 45%? We had the cast of the upcoming Dresden Files Accelerated campaign, Lost Soul, answer 13 Halloween themed questions.  We’d also like to know how you’d answer the questions, so don’t be shy. Let us know exactly what thrills and chills you about the scariest holiday of the year.

1) What is your favorite part of Halloween?

Rob: The costumes. I get nostalgic of childhood memories when I see trick or treaters.

Eric: Grew up loving the monsters

Lilith: The costumes are my favorite. It is always fun to dress up and I also like to see what the trick-or-treaters decided to wear.

Steve: That it is in the fall which is my favorite season.

2) What is your favorite Scary Movie?

Rob: Scream, because it doesn’t take itself too seriously and has nods to some of the classics.

Lilith: Freaks, but The Babadook is pretty damn creepy, too.

Steve: I am not a big “scary movie” person. Life is scary enough sometimes.

3) What is your favorite Halloween Movie?

Steve: Zombieland, at least that is the movie my wife and watch every Halloween season.

4) What is your favorite Halloween Song?

Greg: “Vampire” from the movie Juno

Lilith: “This is Halloween” from A Nightmare Before Christmas.

5) What is your favorite spooky game?

Rob: Turning around in front of a mirror saying “Bloody Mary” three times to invite her to get me!

Lilith: I was a really big fan of “The Secret World” when it came out. Unfortunately, I haven’t really had a chance to play since “Secret World Legends” was released and I think I’ve now lost all my paid for costumes and hard earned outfits.

Steve: Back in the day, it was a good White Wolf game (such as Vampire the Masquerade) or Call of Cthulhu 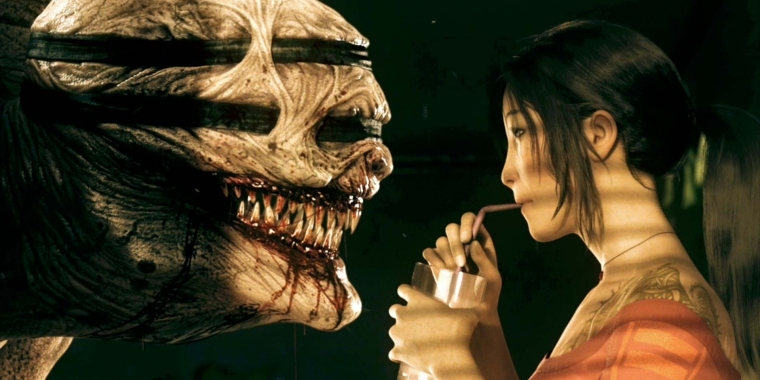 6) What is your favorite Halloween candy?

Rob: Candy corn. Probably the only person alive who likes it.

Lilith: Almost all of the candy is super yummy. Does anyone have trouble keeping their hands off the candy meant for the trick-or-treaters?

Steve: Reese’s Pieces I think. Halloween is the only time I really recall eating them somewhat regularly.

7) What Urban Legend do you find most disturbing?

Rob: The Bell Witch was disturbing to me as a kid.

Greg: Anything that has the guy in the basement…eek.

A Japanese schoolgirl was waiting for her train when she fell onto the tracks. No body helped her and before she could climb back up onto the platform she was struck by the train. When the train passed the girl had been cut in half and was obviously dead.

Now, if you are walking alone in Japan at night you may hear a soft Teke Teke on the wind. The sound will grow closer and closer until you see her. The girl will be coming after you with only the top half of her body. She will be walking on her hands since she has no feet. As she runs her nails make the sound Teke Teke. It seems like it will be easy to out run her so you take off at a sprint, but no matter how fast you run she keeps gaining on you. When she finally catches you she will cut you in half so you can die in the same agony and horror as she did.

What can I say? Japan knows their creepy.

Steve: Um…I am not bothered by any of those now, but if I went back to my childhood maybe Bloody Mary. That would be a stretch, too; I never was much into the Urban Legend thing.

8) Would you survive until the end of a scary movie?

Rob: No because I have a bad habit of running upstairs instead of out the front door. I am also prone to tripping over my own feet.

Greg: I would totally die in a horror movie.

Eric: Only if I were being used by the killer

Lilith: Probably not, I would try to hide and probably think I was safe until I got pulled out of my hiding spot and brutally murdered.

Steve: Yes…because I have this weird thing where nothing strange (i.e. paranormal) happens around me. I have known people who I truly believe have witnessed the unexplainable, but when I am on the scene NOTHING happens. A friend of mine once dubbed it the anti-shining (although we say it anti-shinning with a Scottish accent because of a Simpsons Halloween episode). So if there is something strange in your neighborhood, who you gonna call? ME! (I ain’t afraid of no ghost)

…of course now that I am thinking about it, perhaps I would be the second or third person to go due to my overconfidence in an undefinable ability. I guess it depends on the director.

9) Do you believe in ghosts?

Rob: I’ve had few experiences that make me want to believe, but I’m still middle of the road.

Eric: Spirits of the Dead roaming the earth? No. Demons? Absolutely.

Lilith: I tend to consider myself a skeptical believer when it comes to ghosts and other supernatural entities and cryptids. They could possibly be real. I cannot dismiss other people’s experiences or accounts, but I also believe some events contributed to hauntings have other rational explanations.

Steve: Short answer is no, but there is a much deeper conversation I could have about what I think is really going on and it isn’t a government conspiracy. It is just too detailed to type here. It is better as a discussion.

10) What monster from literature or lore frightens you the most?

Lilith: Zombies are pretty scary, but what frightens me more than any other is the Wendigo. You can at least stop a zombie with a head wound. Wendigos are much harder to stop and they are always hungry for human flesh. Not only that but there is a thing called Wendigo Psychosis were normally sane people will go off the deep end and start killing people around them to eat their flesh.  Research the case of Vince Weiguang Li and Tim McLean if you don’t believe me how horrifying Wendigo Psychosis can be.

Steve: Anything from the Cthulhu mythos. As Lovecraft put it “The most merciful thing in the world, I think, is the inability of the human mind to correlate all its contents.”

11) What do you find really creepy?

Eric: Cultists that really do drink the Kool Aid, so ta speak.

Centipedes/Millipedes – Nothing makes me freak out faster than finding a house centipede . I can’t even fathom living anywhere that has larger creepy crawlies with too many legs.

Snakes – I used to have so many nightmares about snakes that whenever I have a dream with snakes everywhere I automatically know I am dreaming. However, I can become friends with individual snakes if I spend time with them.

Barbarella isn’t creepy over all, but there is one scene with all the creepy little kids and the dolls. The dolls move so slowly and have sharpened, metal teeth.  The kids watch on in glee as the dolls bite down, ripping Barbarella’s stockings and tear into her flesh causing her to bleed. Super creepy.

Steve: Insects and such, I have no fear of them as anything that crosses my threshold learns quickly. I just think they are creepy.

12) If you had to be a monster, what kind of monster would you want to be?

Rob: Monsters always had cool abilities, but terrible drawbacks and curses. But if I had to choose, it would be something with benefits, like a Bearded Devil making deals all day.

Greg: Rakasha. They are cool.

Eric: The kind no one expects until it is most assuredly too late.

Lilith: When I was younger I probably would have said werepanther or something along those lines. Now, however, I think I’d like to be a ghost because I can be a bit mischievous and it might be fun to just mess with people by haunting them.

Steve: When I was younger I thought being a werewolf would be cool. Now I don’t know.

13) What is your scariest or creepiest experience?

Rob: Ever drive home late at night and you realize the car behind you has been following you for the past twenty minutes? You turn right, and they turn right. You speed up and they match. You go a little out of your way, and they follow.  Coincidence or paranoia? That’s a pretty creepy feeling. It happened a lot to me in high school and driving home after weekend school trips. Could just be that I’m jumpy.

Lilith: I was watching a child overnight for family.  In the middle of the night the boy woke up crying and wanted me to sit in his room and stroke his hair until he feel back asleep. I sat next to him on the bed and asked him what was wrong. “A man was watching me,” he said. I was a little creeped out, but brushed it off and told him that it had been a dream. He had calmed down and was almost asleep when we both heard a deep male voice say, “Mom”. The hairs on my arms stood on end and I tried to figure out where the voice had come from. The boy was obviously freaked out as well. Neither of us wanted to be in his room anymore, so we both noped it out of there and went to sleep in the other room.

Steve: My first marriage. I don’t know how I survived. Oh yeah, anti-shinning.

So how about you? What is your favorite scary movie? What scares you? Do you have any spine tingling stories to share with us? You are invited to come play with us. Answer as many of these 13 interview questions as you’d like. We’d really like to hear back from all of our followers.

Everyone at Geek Unleashed wishes you a fright filled (and safe) Halloween night.